tmack Productions, Sarasota/Bradenton, is a full-service video production company for corporate, television, YouTube, documentary video production.  We shoot/produced video projects for our clients all over the country.

We hope our website provides more information on our company and services. Then feel free to browse through some of our video work in our portfolio. We are available to assist in any questions you may have about your upcoming video production and internet video strategy and look forward to talking to you about your next steps and how we can be of service.

Each project is filled with our creative services and skillsets.

Here’s an example of a typical project and the percentage of our services performed on average to bring a video project to life!

A Successful Project is a well thought out project.
We assist with your planning and strategizing to assure
completion and on budget

Production is the actual shooting, to include lighting, and audio.
We assure that each shot counts.

Video Graphics include photos, logos, and more.
Our Adobe After Effects/Photoshop expertise is essential in every project.

Simply Put, editing. All the graphics, footage and audio sweetening brings the project to life.

Whether a project is distributed on the Web or DVD, we can assist in making sure your video reaches its destination in the highest quality possible on time and on budget. 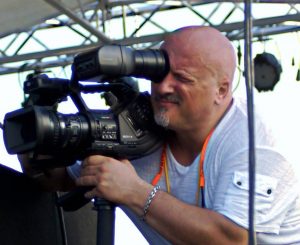 Tom MacKnight’s video career technically started in the early 80s when he and his partner came up with what they called “conceptual videos”.  Although the idea, however, was never taken to broadcast, in 1984 music videos became a household word. In the early 90s,  Tom worked closely with a film and video production company as director of marketing.

In 1994 when the internet was in its infancy,  Tom started developing websites winning accolades and awards for his work.  Tom’s work led to a partnership offer and after fulfilling his services developing a web presence for the company, Tom started working back on his video production incorporating the use of marketing rental properties with what are now called “Virtual Tours”.  This was in 2001/02 prior to virtual walk-throughs becoming a mainstay in property marketing.  Today these videos are commonplace and include drone footage as well as photos and videos.

In 2005, Tom started tmack Productions.  In 2007 “Thunder on the Gulf” a one-hour documentary on the world of offshore racing was shot.  Released in 2009/10 the documentary was the first of many documentaries including shorter corporate documentaries.  Since then, tmack Productions have shot reality shows, commercials, corporate videos and moved back full circle to providing companies with creating a video presence on the web.

In 1995, Tom shifted his expertise to the Internet, realizing that the internet was going to be a game-changer in the business world. Working with a company that brought for the first time,  the Internet into the Birmingham Alabama area,  Tom assisted many companies in their transition to marketing on the Internet and developed many websites and web applications during this time.

Tom’s Internet applications brought him to a partnership with the Resort Guide of the Gulf Coast.  It was during this time that Tom’s passion for video production once again became evident. Tom created what he dubbed “WebMercials” for his resort customers. This was prior to any video-sharing services such as YouTube. Tom created video streaming servers and placed WebMercials on the website. This quickly became a popular marketing product and since then Tom has shot over 100 resort commercials.

Today most produced video projects end up on the internet in one form or the other.  Tom can assist you with your online distribution options.

Full Service means from start to finish.  Got an idea?  We can make it happen.

An idea for a video is only as good as its ability to accomplish the goals of the project.  Whether it is sales, awareness or instructional, your video has to capture attention and create information retention.  Creative services can take those ideas and take them to the next level.  Keeping one toe in the reality pool, we can make sure your ideas are exciting, entertaining and assist in capturing your ideas and making your point.

All video is shot using professional DSLR, Cinealta true HD Cameras and 4K cameras.  Drone footage?  We shoot that too. Handheld stabilization shooting is available as well.  Ample lighting packages assure that your footage is well lit and looks the best it can.  Our audio package includes overhead and wireless microphones for any kind of situation.

Using high-end linear editing systems coupled with advanced graphic software, our post-production services bring your project to life.  A Full Adobe house, we use the full array of Adobe production software.  High-end graphics add an extra touch to your project.  3-D animations can bring inanimate or renderings to life. We can provide ready-to-go videos for your YouTube, Vimeo, website, or Facebook distribution.  Still want a DVD?  We author DVD’s when requested.

Tom’s experience and understanding of business as a marketer, sales, co-owner and a principal owner is key to understanding company needs and how projects can benefit businesses.  Coupled with his production experience, finding solutions and angle for marketing is second nature.

Let’s talk and see how we fit.  That’s the only way to know if we would be the right choice for your video production.  Let’s brainstorm and see what we come up with!

We’d love to talk about your project or just chat about how the video will work with your marketing strategies. So either fill out the form, pick up the phone

Video is part of our everyday lives. From tv's, computers and now our phones. There's a video application waiting for your marketing campaign. Let us help figure out the best possible way to implement your ideas and create a fast ROI on your video investment!